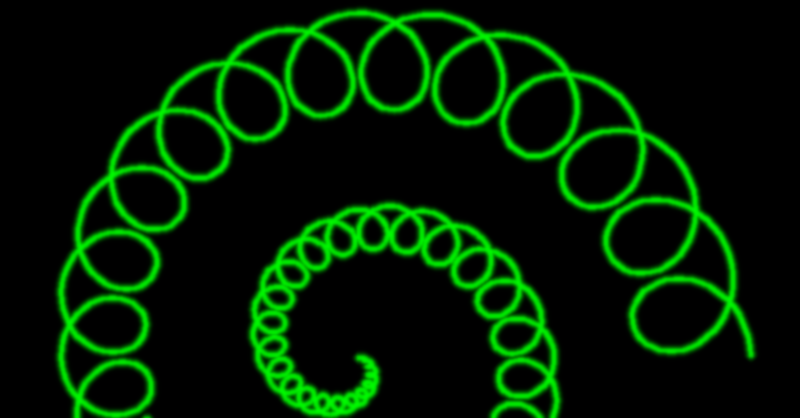 (see this code in situ in thespirals.pyfile in the points demo directory)
An animation made by simple addition of
a Cartesian origin point with
two spinning polar points in a single code loop
tl;dr: This is a joy-of-programming excursion. I have concluded that Structural Pattern Matching introduced in Python 3.10 is a great asset to the language. I like using it in cases of both single and multiple dispatch instead of functools.singledispatch for the former and if-chains for the latter. Why? Visual locality of reference when reading the code: the match statement gives me an excellent overview of how different inputs affect the execution of the function. Additionally, I can finesse behavior of different inputs and their interactions more succinctly than with either functools.singledispatch or the dreaded if-chains. By the way, in case you did not know, I am a heretic.

Using a tuple as a Cartesian or Polar point just doesn't work very well. In Python, the arithmetic operators (+, -, *, /) don't actually do arithmetic operations on tuple. Instead they act on tuple's aspect of being a sequence.__add__ is a concatenation operator, while __mul__ is a repetition action. I need tuples to do vector arithmetic instead. 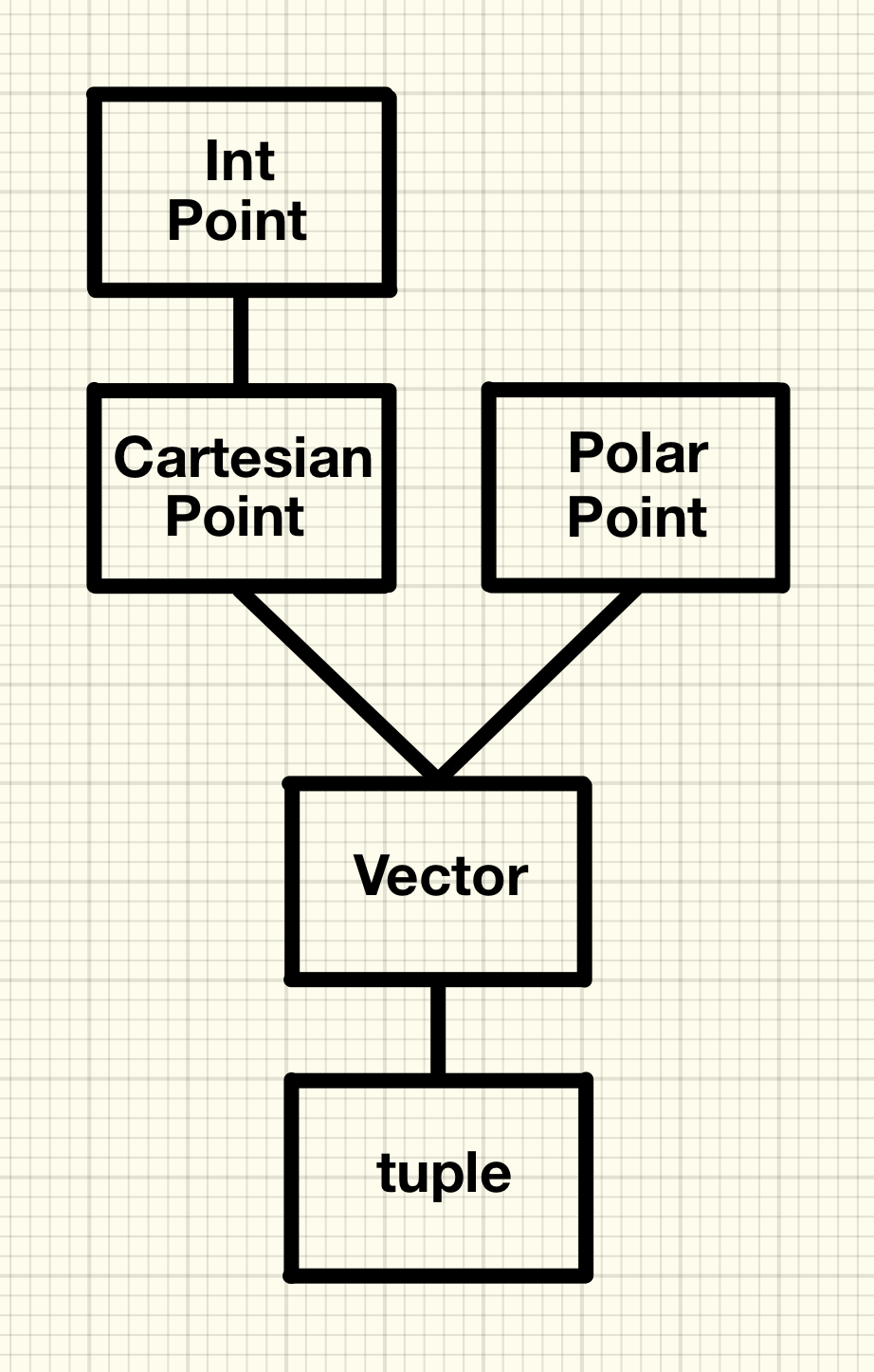 Of course, vector arithmetic is already done properly in numpy. Unfortunately, ndarray is difficult to subclass. All the hand waving and somersaults I'd have to go through with numpy just seemed like too much trouble. Maybe the funtionality I'm looking for already exists somewhere in numpy, but I'm looking for my own adventure.

Arithmetic directly with polar coordinates is nasty buisness. Vector arithmetic doesn't directly work with them. Since I don't want to go there, I decided that a Cartesian universe would be the basis for all arithmetic in this package. Any subclass that doesn't use the cartesian universe must provide conversion both to and from cartesian.

I went ahead and started with tuple as the base class of my vector class. Because a tuple instance is an immutable object, the __init__ constructor is executed too late to give the tuple values. Instead of writing an __init__ constructor method, the __new__ method is the right starting point to subclass a tuple.

This is where I step into the alleged anti-pattern of multiple dispatch. I'm taking the arguments as a sequence of discrete values and making the __new__ method act in different ways based on both the number and types of the input parameters. In otherwords, I'm passing the args tuple directly into the match statement and using its pattern matching magic as a multiple dispatch system. In the first three cases below, they're selected not only by the type of the parameter, but the fact that args has a length of 1. The catch-all default case is for all other cases of length and content of args.

(see this code in situ in the vector.py file in the points main directory)

Had this been written with a decorator based system for single/multiple dispatch, there would be a flock of alternate definitions for __new__ and this unmistakably visible heirarchical structure would be hidden within a flat one. One of the most common complaints in C++, where overloading functions by type (single/multiple dispatch) is common, centers around the mysteries why the compiler chose to invoke one method over another. It's hard to see the patterns lurking within the flattened visual structure of the code on a page. Structural Pattern Matching gives me a visual way to understand how it is going to work at a glance.

Now I have to make theVector class do proper Vector Arithmetic and interoperate with scalars and iterables in a sensible manner:

(see this code in situ in the vector.py file in the points main directory)

The middle case above, case Vector(), demonstrates a key class method that subclasses ought to override: as_my_type. Vectors instances themselves impose no rules on how its components are interpreted. The first layer of subclasses are required to do so. The CartesianPoint subclass interprets its vector components in the realm of cartesian coordinate systems. The PolarPoint subclass, appropriately, interprets its components in a circular/spherical universe.That's where the as_my_type class method comes in. Its job is to take a value and convert it into a value compatible with the calling class' coordinate world view.

Here's how CartesianPoint does it:

(see this code in situ in the cartesian.py file in the points main directory)

Contrast that with how PolarPoint does it:

(see this code in situ in the polar.py file in the points main directory)

Finally, the PolarPoint needs to know how to do arithmetic by converting toCartesianPoints. That's accomplished simply by overriding the Vector base class arithmetic operators:

(see this code in situ in the polar.py file in the points main directory)

Taken all together, these point classes work together seamlessly. The code for drawing the loops in the image above is gorgeously simple in form (a least until the black code formatter mangled the single loop into something nearly unreadable - seriously, do we really need to maintain compatibility with punch cards in the 21st century?):

(see this code in situ in thespirals.py file in the points demo directory)

This family of classes plays a huge role in the development and production of my artwork. Using these classes, I prove that my mazes are solvable with exactly one path. Further they underlie the zooms, pans and rotations, as well as the moving solution lines in my animation, The Dead Spider Waltz.

Since these classes are built on the base class of tuple, they are appropriate for use anywhere a tuple is appropriate. This includes indexing numpy ndarray and working with images in the pillow package.

The full working code of from this post is available in my github repo. However, I've not made this an installable package as that would imply that I'm willing to maintain it in perpetuity. Maybe it will inspire someone to make a more serious version that accomplishes the same thing with more more aplomb and efficiency. This implementation may well be full of problems, can't-get-there-from-here situations, or other such troubles. There is no warranty, no guarantee, and the author is absentee. 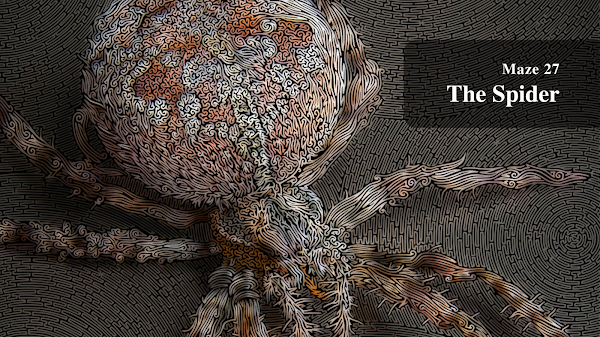 Please support my artwork, coding and writing on Patreon.
Even a small conribution helps.

Yeah, but is Structural Pattern Matching actually Pythonic?
After deep introspection, I've come to
the conclusion that it just doesn't matter.