This is not a HOW-TO guide.
This is just an old man recounting an unwise
adventure from an era of reckless disregard
for his own life.
Do Not Ever Do This!
Unless you personally own the railroad, then you can do what you want.

I had the idea at least four months before I actually acted on it. I did not take hopping a freight train lightly. 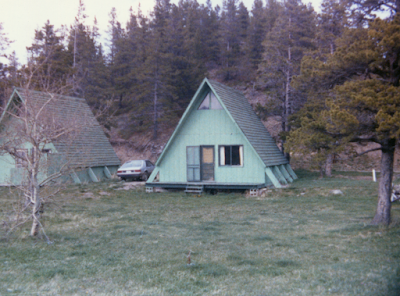 My home on Bison Creek

In the 1980s, I lived in a small cabin just outside the Blackfeet Reservation in Montana. Almost every day, I crossed US-2 and hiked up to the railroad tracks on a gravel road carved into the hillside. The road joined the tracks at the tightest rail curve between the East Glacier Park Station and Marias Pass. My hikes followed the tracks west, tracing the southeast border of Glacier National Park. Always a railfan, I enjoyed watching the freight trains laboring up and down the steep grade. Eventually, I’d leave the tracks, circle back across the valley, then select any number of trails and old roads back down to my cabin on Bison Creek.

In the snowy season, I would cross country ski the route. I've never been a strong skier, in fact, most that knew me in that era may have used the word “pathetic”. But damn, it wasn't for lack of trying. I practiced for years to improve my skiing, but my best talent was injuring my knees, hips and shoulders. Regardless, skiing was still a lot of fun and I was hell bent on doing it.

Support my
artwork and writing
on Patreon.
Even a
small contribution
helps.

Downhill skiers have the benefit of ski lifts at the start of each adventure. Contrarily, cross country skiers ski uphill. It occurred to me that I could get the mechanical benefit of a ski lift from the railroad. Getting a ride to the top of the pass opened new terrain and trails for me to explore. I conjectured that I could ride to the top of Marias Pass, ski the trails up there and then just point downhill to ski the ten miles back home.

As my notion came to me in the Summer, I had plenty of time to research the best way to implement my idea. I rode my motorcycle to the top of the pass to watch the trains. It didn't take long to notice that every Westbound freight stopped at the siding across from the highway. It appeared that it was an inspection point: crews walked the length of every train. It was probably some safety thing they had to do before descending the pass toward Essex and points West. 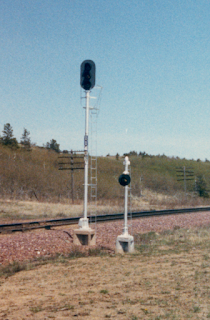 Along the tracks
near my home

I needed a place to get onto the train. It was no good if I'd have to go all the way back to East Glacier Park Station and hope a freight would stop in town for my boarding convenience. It turns out that the tight curve at the start of my daily walk was the key. The trains always slowed to nearly a walking pace around that curve. Testament to the tightness and stress of the curve, broken steel knuckles, the connectors between rail cars, littered ground on either side of the tracks.

I started to watch freight trains for other riders. What railcar type did the hobos exploit? Open box cars seemed to be the choice. If they used other types of cars, I never managed to see them.

Now how could I get into an open box car? They're really too high to jump into while they're moving. I experimented by getting as close to a moving train as I could by standing on the edge of the track ballast. Box car floors are about four feet above the railroad ties, but the ballast slopes down quickly on the edge of the track: horribly unstable footing. I saw no way to get a running start for a sideways leap and I cannot imagine a standing leap into a moving boxcar wearing ski boots.

Thinking back to my childhood, I recall seeing films about how railroads work. Standing out in my memory were railroad workers hanging on the side of rolling boxcars and blithely jumping on and off at will to operate switches and brakes. Could I hang onto the side of a boxcar for ten miles in the winter weather? 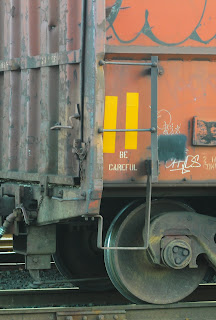 The stirrup and
ladder

I practiced for the rest of the summer jumping on and off that little stirrup and ladder welded to both ends of railroad cars. Getting on was relatively easy as long as I kept my footing. The problem I foresaw was hanging on. Riding even for a few moments was rougher than I expected. It was terrifying to be so close to those huge crushing wheels, I could imagine the catastrophic consequences of losing my grip. Since the use of cabooses on trains stopped that year, I switched to riding the very last car of the train. It seemed to be an even rougher ride, but the consequences of falling were less dire as I would be behind the last wheel.

However, I was still concerned about losing my grip. In the winter, those steel rungs might be extremely cold. The solution was a couple carabiners purchased from a climbing shop. My backpack had a chest strap with attachment loops of nylon webbing. Threading a carabiner through, I found I could lock myself to the ladder rung.

I did a trial run of my scheme in September before the snows started. I rode my motorcycle up to the top of the pass and stashed it in the woods near a highway pullout. I hitchhiked the ten miles back home.

I immediately walked up the gravel road to the tracks to wait for a train. When one passed by, I smoothly mounted my chosen boxcar at the end of the train, clipped myself on and hung on for the ride up the pass. It was terrifying but thrilling and totally hilarious. I laughed like a madman all the way up the pass. At the top, the train slowed to a stop. I unhitched myself, jumped off and casually walked around the rear of the train. I traversed down the slope to the highway pullout, retrieved my bike from the woods and rode home. It was a complete success. 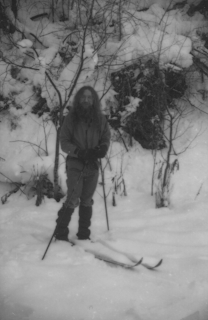 Another place at
another time

My first actual ski lift run was three months later on the day after a deep two foot snowfall. I skied up to the curve, fixed my skis and poles to my pack and waited for a train. Ten minutes later, a train crawled around the tight curve, I mounted the last car in the manner I practiced. I clipped onto rungs and hung on. I was not prepared for the blowing snow. Even with the slow speed, the train whipped a lot of loose snow into the air that swirled in a vortex behind that last car. After only a few minutes, snow plastered both sides of my body and completely obscured my glasses. Accumulating ice sealed my mustache and beard together. Since the carabiners held me fast, I had one arm free and I tried to cover my face. My tuque, knitted by my grandmother a decade earlier, blew off after only a couple miles and I feared frostbite to my ears.

When the train stopped at the top of the pass, I had trouble opening the carabiners as they had iced over. It took a couple minutes to release them. I jumped down and could see the train crew in the distance starting their inspection. I released my skis and poles from my pack, latched the skis to my boots and took off away from the train as quickly as I could. I beelined to the highway parking area at the closed wayside restrooms and ski trailheads.

I brushed off as much of the accumulated snow as I could. I had packed a spare scarf in my pack, I retrieved it and fashioned it around my head to replace the missing tuque. I decided to ski directly home rather than spending time on the local trails. It wasn’t as simple as I had assumed it would be. Since I was off established trails, I was breaking my own trail in the deep new snow. It was exhausting. 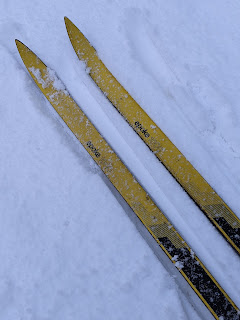 My trail skis
of the early '80s

I ended up moving to the highway shoulder. It was easier skiing, but far less pleasant. I eventually discovered that snowmobilers often traversed up and down between East Glacier and the top of the pass, though I never actually saw anyone doing it. Their tracks often paralleled the railroad or the highway back down the pass. Their tracks eased my skiing through the deep snow.

I repeated this adventure many times over my years in living next to Glacier Park. Only once did I get caught. I was slow in vacating the area that day and a rail worker saw me, “What the hell are you doing? Did you just jump off this train?” He lectured me on how I was trespassing and could be arrested, let alone being killed with my foolish adventure. After I explained how I did it, his response was, “Man you’ve got fucking balls. I’m not going to report this. Don’t you ever let me catch you doing this again,” after a pause, he pointed down toward the tracks beyond the end of the train, and said, “if you had gotten off before that curve, I never would have seen you. Get the hell out of here.”

On future iterations of this adventure, I did as exactly as he directed: I always jumped off before the curve, keeping out of sight of the train inspection and nobody never caught me again.