The Earrings and the Snake

Beaded earrings have been on my mind lately. I've always admired the shapes and movement of the Native American seed bead style but a voice from my past says that I am not allowed to wear them. For some reason, I've clung to that rule from a long dead era of my life, even though there is no reason to have done so. 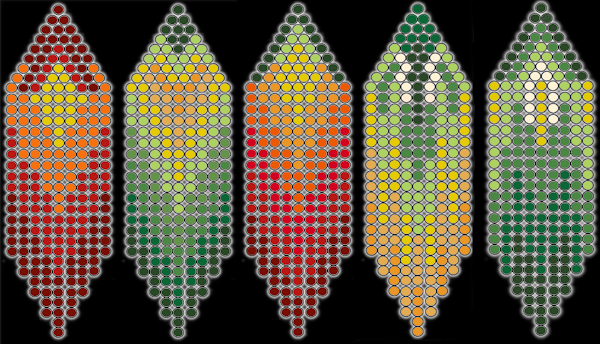 I bought beaded earrings on the Blackfeet Reservation when I lived near Glacier National Park. I learned quickly to not wear them in public, as I was shamed for doing so by both friends and strangers. It was dicey for a man to wear an earring at all in Montana of the 1980s, let alone those meant for native women.

I persisted, though, trying to ignore the disapproving stares. Once, in a bar in Kalispell, a guy grabbed my earring and yanked, swearing at me for being an Indian loving faggot. Fortunately, the earring broke before it tore too far into my earlobe. However, I think I narrowly avoided more serious injury than just a bloody ear that evening.

After the drive back home to my cabin near East Glacier the next day, I was contrite, shamed and angry. Sadly, the anger was directed entirely inward. I took my small collection of earrings, wrapped them in a buckskin pouch and took them on a walk.

On achieving the summit of the ridge behind my cabin, I sat on the ground for an hour gazing at the rugged mountain peaks and the spring snow squalls descending from the slopes. I was lost and wondering why I had no place in the world.

I lifted a stone, carefully put my favorite earrings into the indentation and replaced the stone.

Sitting for a while longer, I suddenly noticed a carved stick set vertically in the ground about thirty feet downhill. I walked down to it in amazement. It was a carving of a snake wrapped around the stick with red beads for eyes.

"Why are you here?", it asked me. "I do not know where I belong," I answered, but the wind whipped my words away. A snow squall enveloped my ridge, quickly turning to rain, but my face was already wet with tears. I trudged back to my cabin deep in my thoughts.

A week later, I hiked back up the hill above Bison Creek only to find the snake stick had vanished. I searched and searched, but I could find no sign of it.

I've not thought much about my beaded earrings in the intervening thirty-eight years. I was reminded of them by a new host on the YouTube science program SciShow . A woman named Rose Bear Don't Walk wore some wonderful earrings and my mind went back to that ridge and the rock under which the remains of my earrings probably still lay.

I followed her on Twitter and Instagram where she posted one evening that she was beading. A thought came to me that I could make my own bearded earrings. I learned to bead years ago when, in foolish pride of my employer, I beaded the Firefox logo to adorn my buckskin laptop bag.

I am inspired by a bold native woman young enough to be my granddaughter. Some thirty-eight years after interring my earrings to the ground, I will wear beaded earrings again. 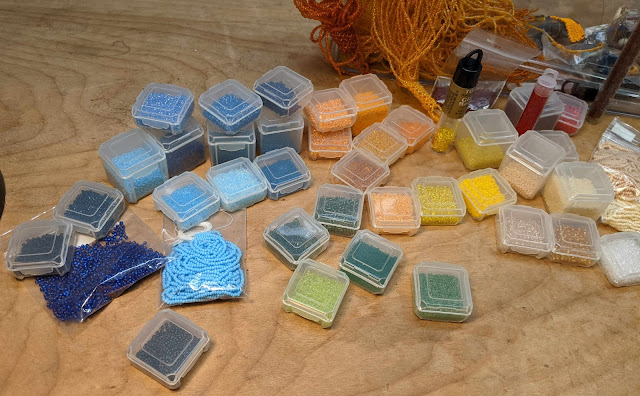 Not bad for my first try ever on making a beaded earring. I managed to break the needle at the very end, my thread was too short and my hands are so cramped from working on this tiny piece it may take days to recover. 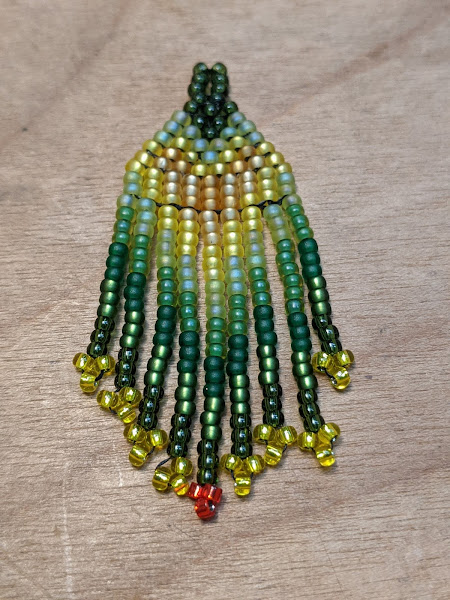