Whim and Pupshaw came to us as kittens early in 2005. Our veterinarian rescued them from the side of a road and brought them in to her clinic. They were both ill and needed to convalesce off the streets. We fell in love with them as soon as we saw them. 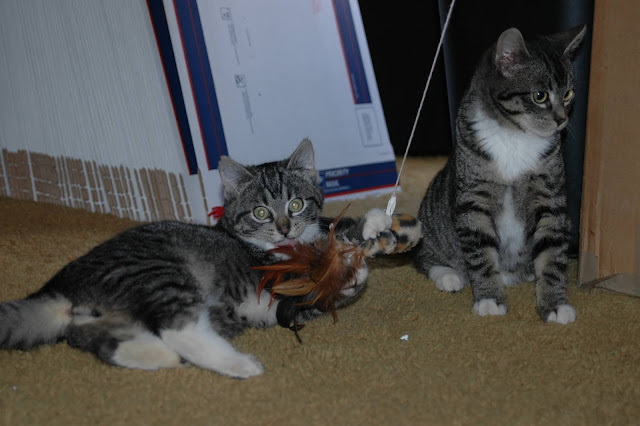 For the first few months, we kept them as indoor cats. We inadvertently trained them to love their carrier box, because we'd use it to take them out to one of our greenhouses to play. Endearingly, they would get into the carrier on their own and patiently wait for someone to take them on an adventure. When they were sleepy and done playing in the greenhouse, they'd get in the box and wait to be ferried home for snacks and a nap. We called it their Magic Box. Its door latch had a characteristic loud squeak. For their entire lives, that sound would bring them running and they would eagerly clambor in and sit down. That worked even in the latter half of their lives as it was only ever used to take them to the vet.

The summer of 2005 was a banner year for the population of voles on our farm. That was the summer that Whim and Pupshaw graduated to being allowed to go outside on their own. They both became great hunters during that summer of plenty. They would dispatch a daily dozen voles from the greenhouses and fields, dutifully bringing their kill home for the benefit of the colony. 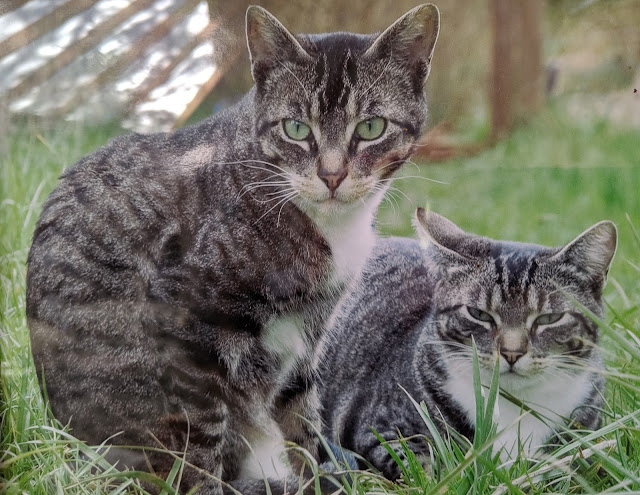 Indoors, they became a terror in the nursery mail order packing room. They loved packing peanuts. Pupshaw would climb into the bag and swim around in them. Eventually, they'd spread them all over the floor. They delevoped a packing peanut surfing technique: lay on the belly, hold the front legs stifly forward, push with the rear legs, plow through the styrofoam until you run into your brother. 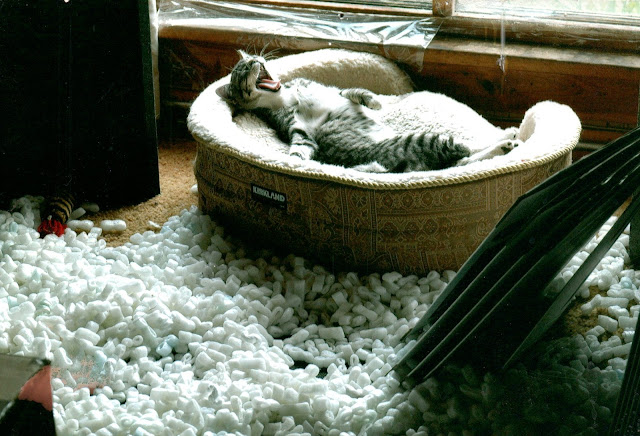 Pupshaw was the curious, gregarious and adventuresome one. He'd seem to try anything once. He wasn't concerned about getting wet. One day, while we were lounging by the river, he wandered into the shallows just to explore.

For the first half of their lives, they were a tightly bonded pair: always sleeping and playing together. However, as they got older, they grew apart. By 2016, they didn't seem to like each other anymore and rarely interacted. 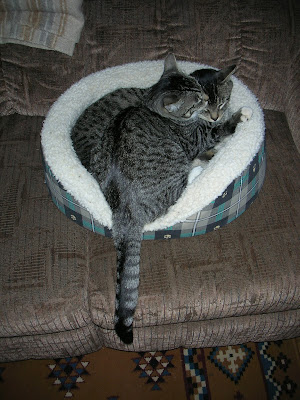 In 2019, Whim started to lose weight precipitously. He developed cancer in his throat and lost the ablity to swallow. He died in October of that year.

We watched Pupshaw to see how he'd react to the loss of his brother. We never detected that he even noticed that Whim was gone. The other cats clearly knew, but Pupshaw was either oblivious or held his emotions to himself.

Around the time that Whim died, Pupshaw was diagnosed with a heart problem: hypertrophic cardiomyopathy. He got slower and slower and struggled to breath. In September of 2020, the forest fires of Oregon precipitated an air quality crisis. We had to abandon our yurt home for indoor space with better air.  Pupshaw did not survive the bad air. He breathing got more and more labored and couldn't walk more than a few feet.

He took his last ride in his Magic Box alone.

We gave them an idyllic life free of dangers and rich with adventure. These boys enriched our lives and we deeply miss them.