The Priest and the Rose Rustling Bikers 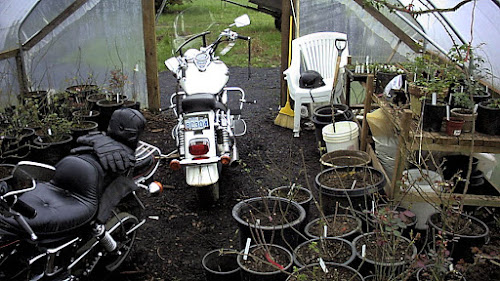 Paul's Vulcan (white) and
my Harley (black) parked
in old greenhouse A
In 1999, Paul and I opened our Internet Nursery, the Uncommon Rose. We were unlikely rose nursery owners. We lived in a yurt on an organic farm and stored our bikes in a greenhouse. During the Summers, we spent a lot of time on our bikes just touring around for the joy of it.

One day, we decided to ride up to visit one of our competitors, Heirloom Roses , a boutique rose nursery about seventy miles north, in Marion County, Oregon. It's always more fun to take the back roads rather than the freeways. I remember heading north of Salem somewhere near the town of Brooks, when I noticed in my rear view mirror that Paul had dropped back and was pulling over. I pulled over and watched him turn around. Confused, I did the same and caught up with him as he stopped on the roadside. 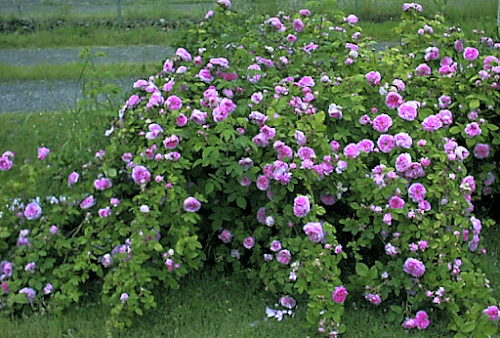 Not the exact rose from
the text, but close.

He was examining a low growing thicket of roses blooming in the ditch on the side of the road in open farmland. He did not know the variety. He claimed to have smelled it before he saw it. It looked totally out of place, almost as if were a manicured shrub. Paul said it was just their growth habit. He wanted to explore the some of the side roads looking for more roses.

We rode around the area for an hour, with Paul stopping several times to examine examples of feral roadside roses. Each example was different. It was easy to see that county road maintenance periodically sprayed herbicides, but never the less, the roses persisted. We ate our packed lunches on the roadside and Paul told me of a Catholic priest known for rose breeding that had lived in Oregon in the early 1900s.  Before we remounted the bikes, the leftover plastic bags from our lunch served to protect the cuttings that Paul harvested.  We didn't know it at the time, but we were about two miles from where the priest lived. 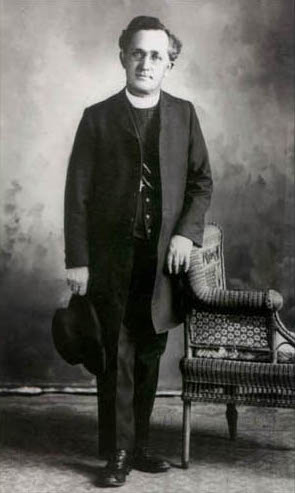 Father George Schoener moved West to Oregon from Rochester, New York in the the early 1900s. He had been assigned to the town of Brooks, a huge pastorate containing two missions, displaced natives of the Kalapuya tribe and homesteaders. In his pastoral duties around his huge sparsely populated parish, was amazed by the fertile abundance of the Willamette Valley.

Father Schoener was a citizen scientist taken with the new and remarkable theories of genetics by another Catholic priest of the previous century, Gregor Mendel. He set to expand the Mendelian theory with work in his own garden in the abundance of Oregon. He worked with many types of plants, but became famous for his work in roses. Fascinated by the abundance of wild roses, he started cross breeding, keeping careful records of his work. He collected hundreds of roses, both wild and cultured. The era's foremost English rosarian, E A Wilmott, sent Father Schoener a thousand plants of roses collected "gathered from under every sky by the explorers" of the British Empire. It was even said that he was attempting to cross breed apples and roses to create an edible rose 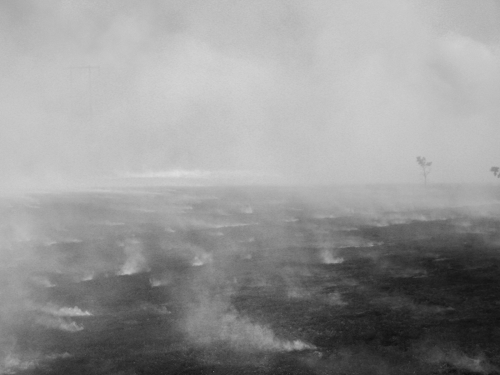 An hour after a fire burned
the field next to our nursery.

His life, his mission and his research were interrupted by fire in October 1915. His church, home, garden, along with all of his records were reduced to a "lava-like desert". Citizens of Portland invited him to that city and establish the "Schoener Scientific Gardens". With the destruction of his parish, the Archbishop released Father Schoener to work full time on the garden. Portland set aside ten acres of McKenna Park for the father. He was a priest with no parish and no money. The project in Portland was thought of as an investment opportunity, but Father Schoener's had a different idea: "the good of our neighbor and to make the world understand that it is good to live in Oregon." He apparently wanted only "cooperation," not a business.

I can find only passing references to such a garden ever coming to fruition in Portland. The existing park bearing the name "McKenna Park" is less than half the size than the ten acres supposedly allotted to the priest's project.

Only a couple years later, Father Schoener was invited to Santa Barbara, California where he restarted his work and stayed for twenty years. Financial considerations eventually brought him to the University of Santa Clara, but his five thousand roses didn't get to move with him. Never flourishing at the University, he died 1941. 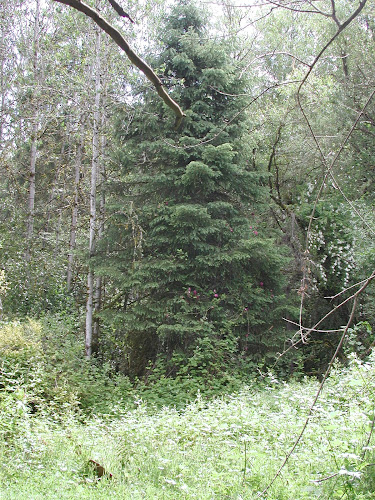 We approach the found
Chintimini Rose
for the first time 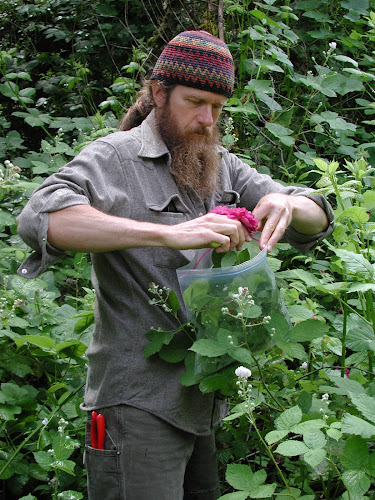 Paul Barden
takes the first cuttings
from the Chintimini Rose

With my eye attuned to spotting roses in unexpected places, Paul and I rode on for the day, arriving home in the early evening. Just a mile from home, I saw a flash of pink high in a tree behind an abandoned building. I didn't get to see what it was. On dismounting the bikes at home, I told Paul and he suggested that we go to look after dinner.

After dinner we walked back along the road to look. Sure enough, thirty feet off the ground hung a pink rose. Closer examination revealed many blooms lower to the ground. Paul didn't know what it was, but, of course, was ready with secateurs and plastic bags for cuttings.

These rose cuttings that we took that day are now fully mature shrubs in our own garden. We've never been able to identify them.  Perhaps the Brooks roses were survivors from Father Schoener's era.  The cuttings from our own neighborhood also defied identification. We named it the "Chintimini Rose" for the cross street name where we found it.

Roses are like trees, they can live for hundreds of years.  We're preparing for some future generation to discover these roses.

That's when we officially became the Rose Rustling Bikers.