History as a Birthday Present

On my 55th birthday, I received an unusual gift: an armchair history adventure similar to a PBS episode of the History Detectives. It started with the gift of three old photographs acquired from a local thrift store.

Written on the back of one of the images was a cryptic “T+T RR ACME MINE 1915”. I wondered if I could find some context for this crash that would explain the strange ordering of the train: two box cars, the engine and then two more box cars.

I started my research by first identifying the name of the railroad, “T+T RR” stands for Tonopah and Tidewater Railroada short line railroad built in 1905 by the Pacific Coast Borax Company to transport borax from the local mines. It was roughly two hundred miles long, stretching from Ludow, CA to Beatty, NV. The rail line was abandoned in 1940.

Wanting to see the location of the crash on Google Earth, I then searched for “ACME Mine” in Google, only to find that ACME is a rather common name. However, since I knew that the Tonopah and Tidewater Railroad ran through the Mojave desert, I examined links in the Google search results that also mentioned California. I focused closely at an entry for the “Amargosa Mine (ACME Mine)” on mindat.org. Looking at some of the icons of nearby locations, I found reference to a place called China Ranch. In Google Maps, I was able to find “China Ranch Date Farm and Bakery”.

That was the key to finding the location in Google Earth.  I entered search for the bakery and then scrolled down the canyon and found remains of an old railroad grade: 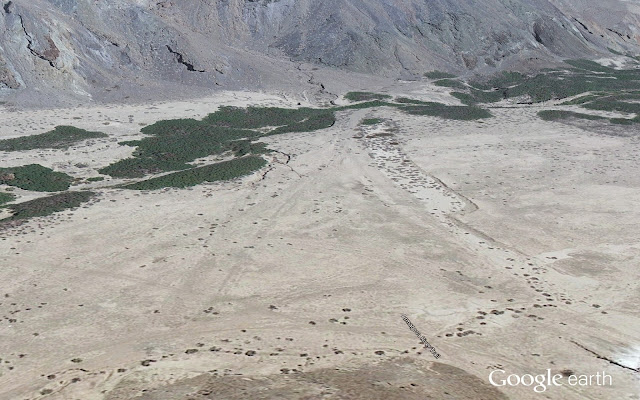 Reorienting the perspective so as to look at the hillside: 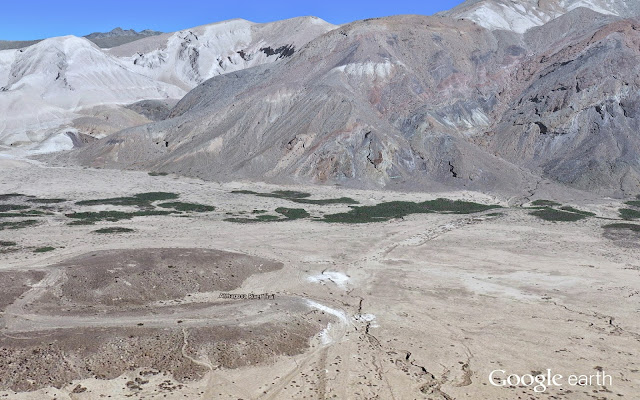 I see direct and obvious connections with the landscape in the original photographs. I found the the location of the crash.

The question that I wanted answered was how did the crash happen.  Looking over the terrain, I can see nothing the helps explain the ordering of the cars in the train. Armed with some new search terms, I entered “China Ranch” “T&T” and found the Google scan of a book called “Railroads of Nevada and Eastern California: The southern roads”. Sadly, the Google scan of this book as vanished from the Web. Before it disappeared, I found this paragraph:

... some new traffic was generated through construction of the so-called ACME spur from Morrison (later ACME) to the main line in Amargosa Canyon ... The tracks ran past China Ranch and through a picturesque canyon to a gypsum deposit at Acme. No particular importance attaches to the line, unless it be recalled that it was on this branch that two cars got away from an engineer and coasted all the way to the junction, resulting in a bad wreck

Further perusal of the scanned book, I found unattributed reproductions of two of my three photos. Captioning linked the photos to the derailment in the quoted paragraph above.  So I found a reference to the derailment, but no details.

Browsing lead to a cache of images of the Tonopah and Tidewater Railroad called the “Henrick Collection”, I noticed a flaw in my search strategy. I kept using the term “derailment” and it seemed the term “wreck” was more common in that era. The simple search “T&T 1915 Wreck” yielded the gold that I needed: a newspaper clipping from the “Tonapah Daily Bonanza” (which as since vanished from the Web) with an account from a participant in the rescue and clean up.

It turned out that this was a pretty dramatic crash: two runaway box cars were being chased by an engine towing two other box cars. On finally catching and coupling, they were going too fast for the curve and rolled. It was, perhaps, a good thing they rolled, as the story implies, a passenger rail car with a complement of passengers waited on the track nearby or below.  One person, the fireman, died from injuries suffered from bailing out at the wrong place. The engineer was “frightfully maimed and burned”, but recovered within a year and returned to work.  The locomotive, #9 survived, was righted and labored in the heat on the Mojave rails for another twenty-five years.

That explains the odd ordering of the cars with engine in the middle. My original question had been answered.

Of course, this spawns more questions.  Are these photos of the era or later generation reproductions? How did they end up in the Humane Society Thrift Store in Corvallis, OR?  These questions are for a future history expedition.

I've got to say, Paul, this was a brilliant birthday present.  It wasn't just a thing, it was a wonderful mystery to solve.  It demonstrates the power of the open Web. I'm grateful to live in a time where such a research project is achievable from my home desk in mere hours.