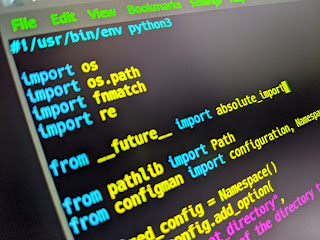 I'm currently involved in porting a Python 2 codebase into Python 3. This effort has been going on for a while with several programmers participating. Instead of just jumping in, I decided to review the work already done so that I could get a feel for how the process worked and what kind of problems I'd likely encounter on the way.

I noticed this line at the top many files:

I'd seen this import before and I had a vague understanding for what it did. Never wanting to introduce code into a system that I do not fully comprehend, I decided that I would research it.  Many people have written about Python's import system and I found many outdated posts and conflicting information.  Even PEP 328 that defines the absolute_import line behavior is not entirely clear. I eventually resorted to spelunking in the Python 2.5 and 2.7 source code to see how it worked.

Some definitions before I go on:

absolute import - an import with unambiguous completely qualified names for all packages and modules:

implicit relative import - When writing code that is distributed in a package of modules, this is a short cut technique where code within a module can import sister modules or symbols within sister modules without reference to the parent package.  Python 3 does not support this type of import.

explicit relative import - introduced in Python 2.5, this replacement syntax employs Unix filesystem-like dot characters to refer to parent packages or modules.  This type of import is always of the form: from <location> import <symbol list>.

Both Python 2 and Python 3 follow their own strategies when attempting to resolve package and module imports.  Python 2 will first search any containing package to resolve a module name before moving on to searching the sys.path list.  Python 3 does not search the containing package unless explicitly directed to do so through the use of the relative dot syntax.

I advocate for the absolute_import line to be used as a temporary tool that should be removed from production code.  In code that has been stripped of implicit relative imports, it is just noise.

* herein resides the rare special case: if an absolute_import line is present in Python 2 code and it happens that an implicit relative import module name is the same name as a system level package, then the wrong module will be silently imported.  This will likely result in AttributeErrors when using the module, but if the intent of the relative module was to mimic the system level module interface with different behavior, the erroneous import may go undetected.  Only thorough testing and careful inspection can find this sort of problem.