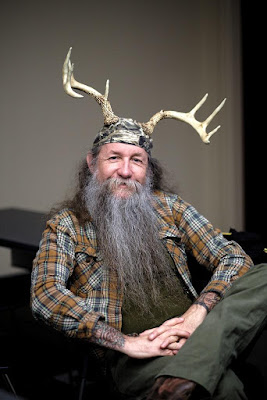 I designed my costume antlers using online and local 3D modeling software.  I then used a Makerbot Replicator 2 to bring them into the real world.  I've worn them for silly occasions for the last five years.

I originally made them in 2014 and realized only recently that I had never blogged about them.  Unfortunately, I didn't keep a very good photographic record of making them as I was totally engaged in the novel process of sculpting with a 3D Scanner App, Internet 3D modeling services and free 3D Modeling software .

It started with a set of real antlers that I've had on the wall for thirty years.  I put them on a little table in the center of a room and then used an app (it seems to be defunct now) on an iPhone to take twenty photos from all around.   The app uploaded the photos to a Web service that then returned an STL file.

I uploaded that STL file to the online 3D Modeling app, TinkerCad .  The model was very crude and actually captured great swaths of the room and table.  I used TinkerCad to isolate the right and left antlers into their own files. 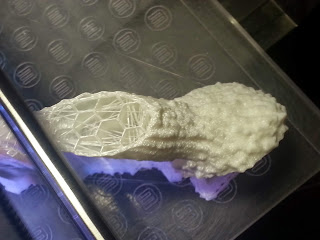 The base of each antler was enlarged using MeshMixer to accommodate a socket joint.  The base has a rectangular indentation topped with magnets.  I wear a circlet of 14 gauge copper wire over the top if my head, behind my ears and behind my beard at my jaw.  Two 3D printed rectangles containing complementary magnets sit on the wire at the top of my head and fit the corresponding sockets on the antlers.  The magnets prevent inadvertently putting an antler on backwards. I don't have enough hair anymore to hide the wire on my head, so I wear a bandana. 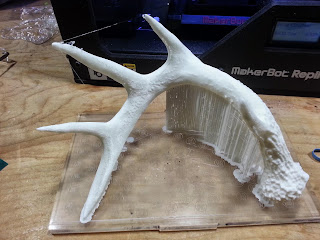 The antler are printed with a hollow honeycomb structure, so they weigh very little.

It took fourteen hours each to print the two antlers.  Getting them to fit within the buildspace of the Replicator 2 was very difficult.  I ended up having to shorten all of the antler's points to get it to fit.

The original STL file was crude and didn't capture the texture of the antlers.  I reproduced the bumps and ridges of the natural antler using pinpoint inflating and deflating tools in Meshmixer. 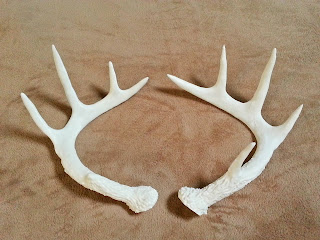 After printing, I used acrylic paint to give the base dry bone color.  A thick coat of paint filled in the striations of the layered texture inherent in a low resolution 3D print. 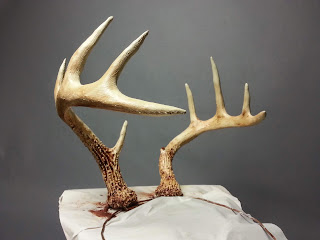 I added the dark brown by slathering it all over, waiting about ten minutes, and then wiping it off with a damp cloth.  Of course, that meant that convex surfaces cleaned back to bone color, while the concave surfaces held onto the darker color. 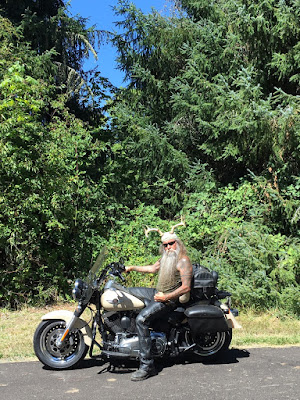 The antlers have been great fun over the years, but it also has caused some awkward moments.

My antlers are one of a kind. I somehow managed to lose the final STL for both of them.  To print these again, I'd have to recreate them from scratch.