Older Article ►
It was a pivotal time in my life.  One day, back in 1973, my father brought home a television game console that could play a Pong-like game, the Magnavox Odyssey.  I was mesmerized, along with all my neighborhood friends.

With a 13 year old's dawning interest in electronics and to the horror of my father, I opened the case up to see how it worked.  Yes, I got in a lot of trouble for that vivisection of a very expensive piece of equipment.  I didn't break it, I demonstrated that it was still in working order.

My subsequent experimentation with it went underground - I kept my exploration a secret - never working on it when my parents were home and always ensuring that it was reassembled and working by the time they returned.

It became my first hardware hack.  I wanted it to have sound, a little plunk noise when the "ball" hit a paddle.  I knew how to make a sound generator with a speaker and an oscillator from my Radio Shack 150 in 1 Electronic Experiment Kit.

The Odyssey was all hand soldered discrete parts with no ICs: lots of transistors and capacitors standing up above Bakelite circuit boards at wonky angles. None of the leads on the backs of the boards were trimmed.  It looked really messy.

I started by probing the legs of transistors with a tiny Radio Shack analog volt meter.  I'd get friends to play the game, so I could concentrate on the voltage levels. I found two places that alternately had higher voltage depending on the direction of the ball.

Thinking ahead, I realized that I could use that voltage to charge a capacitor.  I don't recall the entire schematic, but I figured out how to charge the capacitor and then when the voltage dropped, dump the stored charge in the capacitor out to power an oscillator.  If I used an electrolytic capacitor of about 10µF, I could get the oscillator to just chirp once before the power died.  I placed one of these little circuits on each of the two places that I previously located.

The result was a satisfying plunk noise each time the ball hit a paddle.

I didn't keep the circuits, I had to restore the game back to appear to be unmolested after each experiment.  Plus the oscillators were implemented in the Radio Shack 150 in 1 box and I wanted it available for other fun projects.

Forty plus years later, I still have a memento of the Magnavox Odyssey, one of the momentary push buttons from the top of one of the hand controllers: 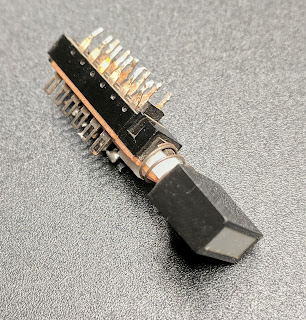 As an adult in the 21st Century, I strongly support the right to hack.  Too many of the devices that we have today are sealed shut and cannot be modified.  To do so allegedly violates the intellectual property of the manufacturer.  Bull shit.  It is extremely important that the young are able to learn through exploring and manipulating.  We all ought to have the right to tinker.