Metrics for a Hostile Work Environment 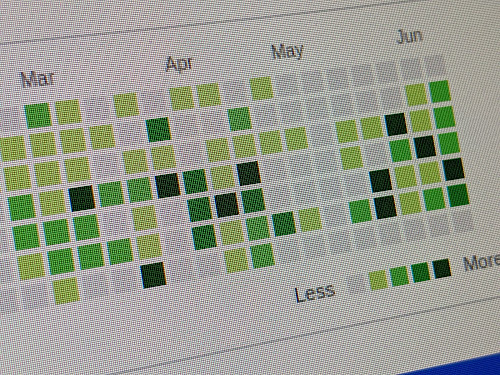 Just because you can collect and aggregate data about your team and its members, doesn't mean it is a good idea.  A business needs to set goals and find measurements in order to judge how the goals are being met.  However, publicly posting the details and ranking about each individual is a recipe for ruining team cohesion and spirit.

Years ago a metric of productivity was introduced as Lines Of Code written.  It didn't take very long to recognize that as productivity measure, it was a pretty bad metric.  It's easy to demonstrate that in some cases lines of code removed could be a better measure.  It's a struggle to come up with useful measure of productivity especially in Software where just thinking for hours at a time are required to be productive.

In our more modern age, the low hanging fruit of metrics are those that are easily drawn from our bug tracking and source code repository systems.  How many bugs did we close in Q2? How many commits (either adding or removing lines of code) did the team do?  However, not all bugs nor all commits have the same value to goals of the company.  To use these as a sole measure of meeting goals is short sighted.

I recall in graduate school, professors would post rankings of every student in their classes on sheets outside their office doors.  At least they had it coded by student ID number rather than names. It brought out the worst in me.  If I was not on the top of every class, I considered myself a failure.  I was unwilling to cooperate with other students or help them.  All of us in these classes suffered because it was a competition and not a group effort.  It was immensely dissatisfying to have to compete. I worked fourteen hour days sacrificing my relationships and my body trying to prove myself out of imposter syndrome.  While it drove me to hair's breadth of achieving a 4.0 GPA, I would have been happier without the intensity of the competition.  It didn't help with the imposter syndrome either.

Bringing to mind my graduate school experience, a team I used to work with would regularly publicly post a breakdown of the metrics from the bug tracker and the source code repository.  Each member of the team listed by name and ranked by number of bugs or commits.  In my mind, there was an implicit judgement of  ranking from best to worst.  I strongly suspect that every person that received the information looked for themselves on the list to see their position in the hierarchy. I'd always found the posting demoralizing and it ended my useful productivity for that day.

If engendering competition in the ranks of the team is what it takes to achieve the company goals, then there's probably a lot of unhappy employees.  I believe a strongly competitive workplace is not compatible with creating a diverse work environment.  Diversity is just about race, gender, etc.  Diversity is also about how peoples' minds work. Aggressive competition is neither a universal character trait nor a universal motivator.

We work best when we work together, not against each other.  Unfortunately, I don't know how to measure that.