From 28Kbps to 28Mbps in an Afternoon 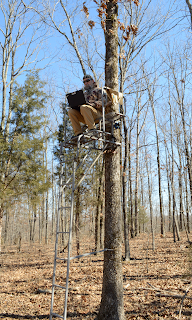 It surprises me that we in the United States have not treated nationwide deployment of broadband in the twenty-first century in the same manner that phone and electricity service was spread in the twentieth century. Is there a doubt that those initiatives last century were a economic boon and a revolution in the standard of living?  It seems pretty clear to me as Google contemplates gigabit fiber to Nashville just sixty miles away that the free market has not spread broadband effectively to rural areas.  I'm sitting at a friend's house in rural Tennessee that has effectively no access to broadband.

[author note: satellite was looked into a year ago and no plan was found to be appropriate. However that may have changed and we're currently re-evaluating that option.  One of the factors in the use of satellite is lag due to the distance the signal has to travel - lag is important in evaluating broadband for uses including games or interactive applications.]

AT&T, the local landline provider, from the perspective of this household, is seemingly uninterested in expanding the availability of DSL into these rural areas. The cell companies aren't doing it either. It is rough terrain and cell signals don't propagate well into low valleys and hollows that spread off the plateaus. Cable is miles away and not visibly expanding.

This is a tragedy for the people like my friends here. There is only so far one can go with a 28.8K dialup modem. So much of the Web these days assumes that the users have a fast connection to the Internet.

I've taken it on myself to help my friends get at least some semblance of broadband to their home. I know that the small town about four miles away has both AT&T wireless and Verizon cell towers. If I could get a cell hub and a microwave relay system, I might be able to get broadband to my friends.

From the cell tower in town four miles away, I plan on catching the cell signal at the top of the ridge above the house with a cell data hub (for today's test, I'm just using my Verizon cell phone). That will offer a small circle of WiFi at the top of the ridge. From there I will use a TPLink TR-WR702-N in client mode to repeat the WiFi onto a standard ethernet cable. 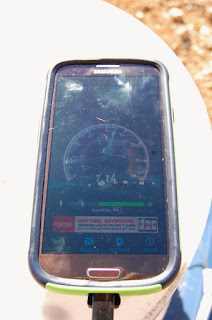 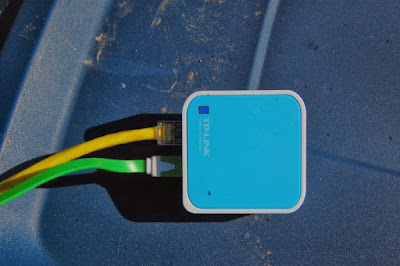 The ethernet cable goes from there go to a solar/battery Power-over-ethernet adapter that will forward the network to Ubiquti Nanobridge M5 microwave relay. 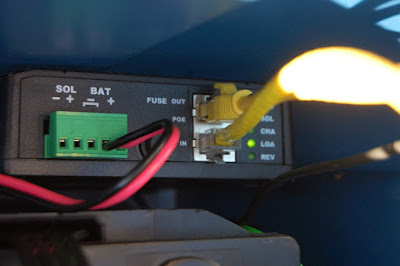 All this equipment will be powered with a 120AHr 12V RV battery. Eventually, we'll add solar panels to keep the battery charged so my friends don't have to cart heavy RV batteries up the hill. 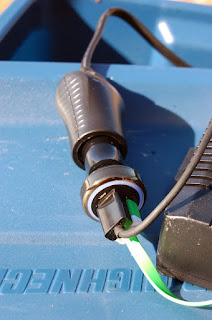 Aiming the microwave dish was easy.  Since it only had a quarter mile to go, I just had to point in the general direction of the house. 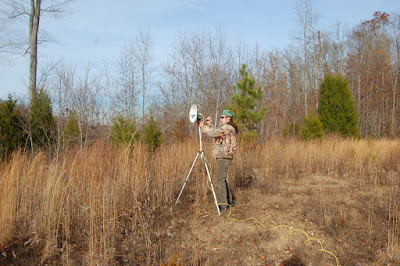 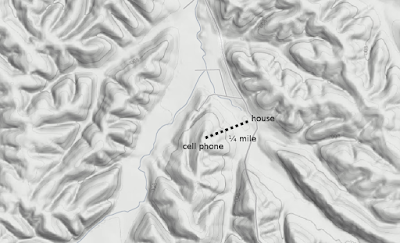 Meanwhile, the house will have a paired Nanobridge aimed up at the top of the ridge. That'll extend the network onto the a wired ethernet network in the house. Finally, that network will feed house WiFi network. 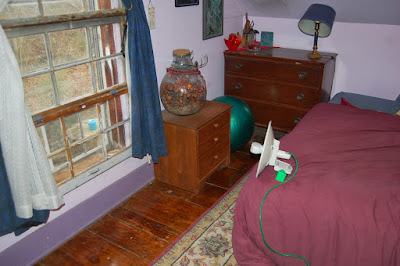 All said and done, we've exceeded expectations by more than two and a half times: 26.3Mb, I had hoped for 10Mb. That's quite the revolutionary change from the 28.8K dial up signal that has been the only option prior to this point.

During this week that I am here, we will replace my phone with a Verizon Mobile Hotspot.

Then it all fell apart.

[3pm]
I regret to report that as I leave my friends place in Tennessee, I leave them with very unstable broadband.  Yesterday, I reported that we managed to get 28Mps broadband connection the house.  That lasted only for a day, and suddenly our source Verizon WiFi hotspot failed to deliver that bandwidth.

I had no idea that cell service was so variable over time.  The same equipment that gave us a consistent 4G four bar signal on Monday, now can only get a 3G two bar signal today.  In the last forty-eight hours we've been lucky to get an intermittent 200Kbps signal.

[5pm]
We've canvassed the ridge looking for a new location for the WiFi hotspot and finally found a place that consistently delivers a 1Mbps 3G signal.  Interestingly, this a place that delivered essentially a zero signal on Monday.  The variability of signal strength at a given spot is a serious impediment to success of this project.

Since I leave tomorrow, I'm out of time.  There's not much more than I can do on this visit.  My hosts are still pleased with the results.  The bandwidth is forty-five times faster than the old 28.8Kbps of the old  system.

We'll see how this works for the long run.  Maybe it will settle into a more consistent pattern.  However, I wonder how that will change as Spring comes and the heavily timbered forest of the area leafs out.

I've briefed my hosts on the necessity to monitor the bandwidth and move the hot spot.  I had hoped that this would be a set it and forget it installation, but fear this will be a system that will need constant baby sitting.

It was my fault! Monday's 28Mbpswas not an anomaly. At one point in the installation, the WiFi hot spot crashed and I had to do a factory reset.  Little did I know that factory reset disables the 4G radio: our throughput dropped to an abysmal 200Kbps.  Once re-activated, 4G speeds came back and remain consistent.

After crowing success, then lamenting failure, I'm back to shouting "success!"

I'm back home in Oregon and I've heard bad news.  The project stayed working for two weeks and then lightning destroyed it. It wasn't a direct hit as nothing literally melted. However, every piece of electronics,the solar/battery Power-over-ethernet adapter, the mobile hot spot, the microwave relay dish, was bricked. With a loss of almost all components, this project has failed.

We must find another way.