I'm just going to face it, Ubuntu and I are going our separate ways, sort of.  When 11.04 came out, I was appalled at Unity. It didn't work at all for my style or work flow.  Embracing the one size fits all mentality, Unity is a netbook user interface with delusions of grandeur.  Trust me, it doesn't work on a large monitor at all.  Suddenly a mouse has to travel has to travel hundreds of mouse-miles just to get to the icons and menus.

When I first started using Linux, I used the Suse distro.  I enjoyed KDE a lot, we got along well.  Then came the version of Suse with the first iteration of KDE4.  I hated every second of it - all my cool customization didn't work anymore.  I dropped KDE for Gnome.  Gnome seemed like a step down, but I got used to it over the next few years. 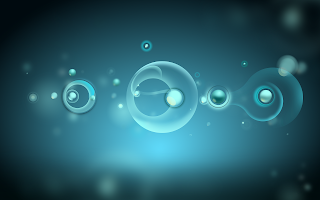 Now I'm looking back to my old friend KDE, now at version 4.6.  It's had some time to mature and they seem to have restored most of what was lost in the jump to 4.0.

I'm going to log my experience as I re-adopt KDE.

First impressions:  the aqua colored "Horos" design plastered on the default backgrounds is really ugly.  That was the first thing I replaced.

I'm really impressed with the how configurable the UI is.  There seem to be settings for everything and nearly everything can be customized.  So the initial default look and functionality of KDE, like the other modern GUI shells, is really pretty awful. Fortunately, it seems that everything in KDE is configurable.

Once I got the hang of it, I completely swapped out almost every default behavior and look.  I thought that default half-assed file browser with the giant icons plastered across the default desktop was ugly and useless.  I got rid of it.  Through the amazingly configurable UI, I was able to reproduce the familiar look of Gnome 2.x that I've been comfortable with for years.  Many features are superior to what I've been using in Gnome, and several I've found to be jaw droppingly clever.

I've been a fan of multiple desktops since my days of using an extension for Windows 2000 (can't remember the name).  KDE has taken the idea into another dimension.  Activities are sets of desktops.  They're intended to be used as a common work environment.  For example, I'm using an activity for work.  It contains six desktops with my work tools: my IDE, clusters of shells, a vagrant virtual machine and an IRC connection.  I've got another activity for general use: Firefox and Opera live there along with my sys admin tools.  Yet another is for my small business: a virtual machine running QuickBooks and several spreadsheet projects.  Call me a man of excess as I now have eighteen desktops in three activities.  Each one has custom colors, style and desktop icons.

I'm intrigued by several clever features.  Everyone is familiar with the GUI file browser.  Dolphin, at first, seems pretty much like all of them.  I inadvertently stumbled on to a really cool feature: a shell session in a panel on the bottom of the graphical file browser.  Even better, the shell session tracks the current position within the browser.  It's easy to drill down to a deeply nested directory with the mouse and, on arrival, dropping down to the shell panel to invoke vi, grep or tail.  I'm finding all sorts of uses for this. 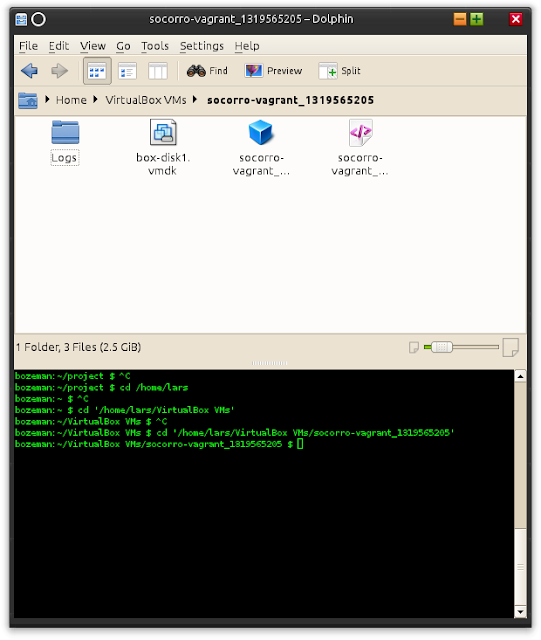 I often work with a half dozen shell sessions tiled on the screen.  Usually three or four are active while the fifth and sixth are spares.  I with the "Window Groups" feature, I can have completely different programs appear to share the same window.  I take one of the lesser used shells and group it with an instance of Firefox.  The title bar becomes two tabs, one for the shell and one for Firefox.  Now I can continue my work in the other shells and be able to temporarily toggle the spare window between the two as I need them.


Here's Firefox, Reconq and Opera all sharing the same window.  Notice how the title bar has been broken up into tab-like sections for each app.

There's a lot I'm liking in KDE.  There are some rough spots, too.  I'll probably whine about them at a later date, but for now, I'm a happy camper.