We're getting quite excited these days about carnivorous plants.  With the lull in the rose business, we find ourselves with free time and we're indulging in some horticultural stuff just for fun.  We've acquired many different types of the carnivores and we're experimenting on exactly how to culture them. 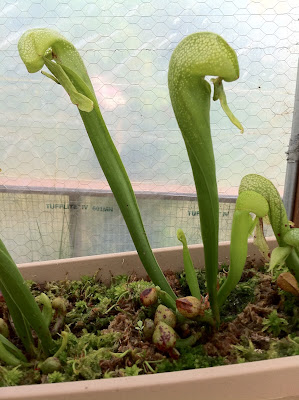 These are Cobra Lillies, Darlingtonia californica.  They're native to North America, but only in a few places in California and Oregon.  Like most of the carnivores, they live in boggy areas of poor "mossy" nitrogen deficient soils.  They supplement their nutritional needs by luring insects into a tube from which they're incapable or too stupid to escape.  The bugs eventually die and drop into the enzyme rich fluid at the bottom of the tube for digestion. 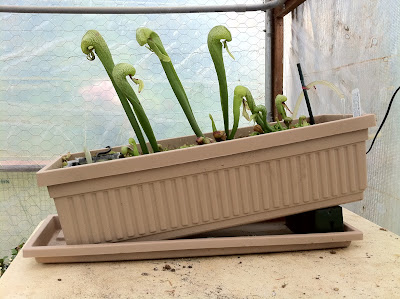 Why is the pot all tipped up?  Well, in order to keep these guys thriving, we want to mimic their natural environment as much as we can.  They really like to have their roots wet, but not in just standing water: the water must move.  We pump it out of the low end and back to the high end. 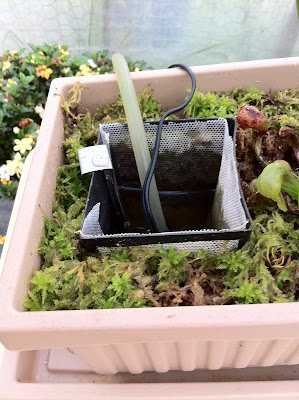 The main pot is filled with crushed quartz filtration sand and live sphagnum moss.  We placed a small fountain pump into a standard nursery band (small rectangular pot, 3x3x6) with its sides cut out and replaced with plastic screen. That smaller pot is buried up to the brim, providing a hollow that fills with water free of sand and moss. 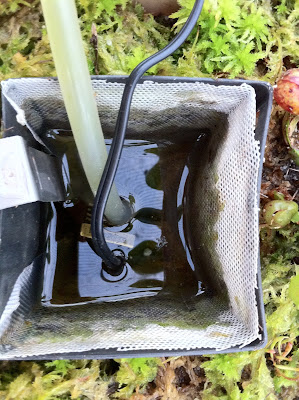 The tiny pump cycles the water back to the high end of the pot.  The water is effectively filtered through the Darlingtonia's potting medium. 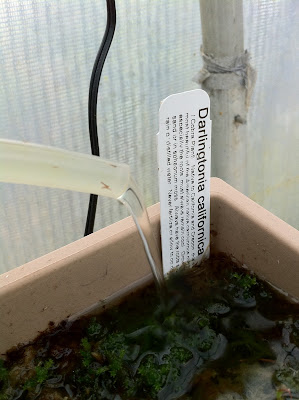 This is an experiment.  We had some of these plants about a decade ago, but they didn't live long.  They have very specific cultural needs and we likely failed before because we didn't meet those needs. If this small experiment works, then we'll probably try to scale it up a bit.  Why?  Well, we aren't pushing to the point where we'll go into business selling these guys.  There isn't much of a market for such a finicky plant.  This is just for fun.