"It's just a pressure cooker with a '90s electronic user interface," that's what I said when I first investigated this latest in fad consumer kitchen gadgets last fall before Christmas.  "In two years, most of them will be gathering dust next to a juicer, a crock pot and a bread machine."

I'm now prepared to eat my words: tender succulent words pressure cooked to a soft flavorful perfection.  I'll admit, I've not been so enthusiastic about a kitchen appliance since the first Dak Auto Bakery model FAB-100-1 in the '80s. 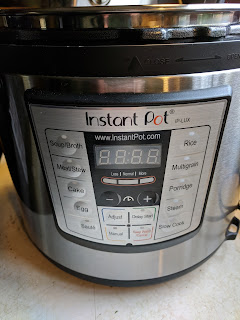 It started on a whim yesterday when I decided to buy an Instapot.  You see, while I considered it as a fad kitchen appliance, I realized that in our household, a fad juicer from the `00s gets used almost every day.  That fad food processor from the '80s finally wore out and I recently replaced it.  We've worn out four bread machines since the `90s since we use them so consistently.  So maybe I ought to take a closer look at the Instapot.

The first meal made with it was a resounding success: spicy cilantro dal for which actual cooking time was about ten minutes.  It was great.  I made that ahead of time and then made Butter Chicken closer to dinner time.  The time savings was greatly appreciated.

Cooking on weekday evenings is always a chore.  I'm exhausted from work, I have too many other things in mind to do.  I don't want to spend much time in the kitchen, I don't really like to cook, but I still want to control the ingredients in what I eat.  I've aspired in the past to making a bunch of meals on the weekend to be frozen and used during the following week.  Aspired, but never succeeded.  It turns out that like week day evenings, I don't want to spend a lot of time in the kitchen on weekends, either.

With the Instapot, perhaps I can reduce kitchen time at the same time as I increase kitchen output.  Time will tell. 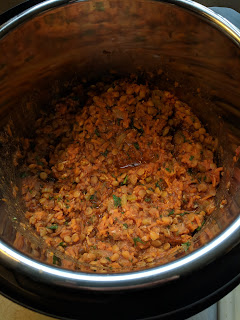 In this inaugural week of use, I'm going to try different recipes and adapt some old favorites.

In terms of old favorites, the "lentil-tomato soup" from the original 1972 Vegetarian Epicure has been my top comfort food for my entire adult life. It takes three hours to cook with a half hour of prep and, really, I'm the only one in the household that likes it.

This afternoon, I tried to adapt it for the Instapot and it was another resounding success with only ten minutes of cooking time.  Here, I offer my altered recipe of an old favorite:
2/3 cup dried lentils
1 1/2 cup of water
4 carrots, shredded
2 stalks of celery, shredded
1 small can of tomato paste
chopped parsley
4 cloves garlic
salt & pepper
1 tsp thyme
1 tsp dill
1 tsp tarragon

Put everything in the Instapot, except the parsley.  Cook in manual mode for 10 minutes, with a 10 minute pressure release time.  Add the chopped parsley and let it keep cooking in "keep warm mode" for another ten minutes. 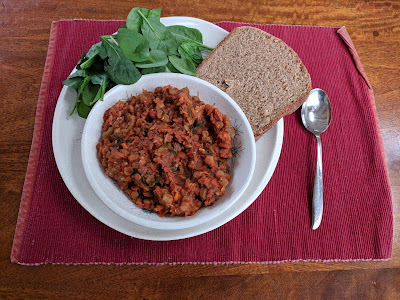 I eat it with a spinach salad and fresh bread from that bread machine that I mentioned earlier.  Now if only clever person would invent a fad kitchen appliance that could do the dishes. Uh, wait...